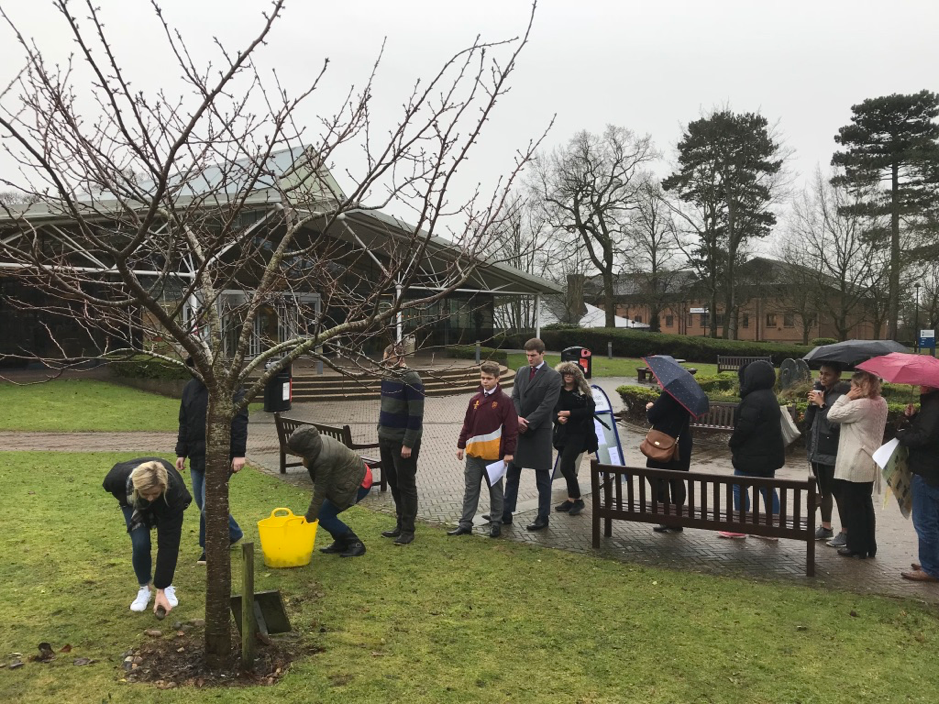 We started at the Anne Frank/Stephen Lawrence tree. This was last time we will meet here, as the Park campus will close as the university moves to the new Waterside Campus in September 2018. Despite the rain, the memorial service was well attended by students, staff and visitors to the university. Fr. Andrew Behrens delivered a homily that encouraged us all to reflect on the sentiment of ‘never again’.

Moving into Grendon lecture theatre and out of the rain, with hospitality organised by the University Chaplaincy, the keynote lecture was delivered by Professor Aristotle Kallis, from Keele University. He is an expert in political extremism, as well as the Holocaust.

His talk explored the meaning of licence, and how this concept has enabled regimes to create spaces where people felt justified in commiting acts of violence against either their own people or other nations. Kallis also made reference to the theme of ‘never again’, in that we have not learned the lessons of the past as conflict and genocide continues today.

I also delivered a short talk on anti-fascism and an update on the research I am undertaking on the Searchlight archive, a resource situated at the University. I gave an overview of the campaign Searchlight undertook to expose alleged Nazi war criminals living in Britain during the 1980s and 1990s. I also discussed the War Crimes Act and how that was used to launch a successful prosecution in 1999.

After my talk, Siobhan Tatum, working on an oral history project in Wellingborough, detailed the progress of the project she is working on. She showed excerpts from the continuing oral history interviews. She also reiterated that more student volunteers are needed to help with the project.

Finally, there was a Q&A chaired by Paul Jackson, where the audience and speaker’s reflected on the difficulties in the prosecution of war crimes and how this may not go far enough to address the complexities of the Holocaust. Historical events help us to understand the political landscape of today, and events such as Holocaust Memorial Day are important for fostering this understanding.