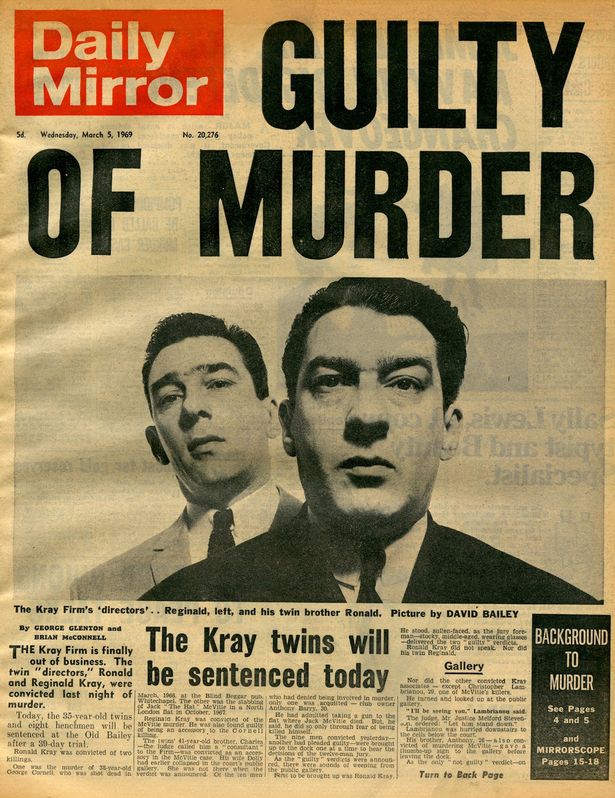 On the 8 May 1968 a series of dawn raids were carried out by ‘more than 100’ Metropolitan Police detectives, led by DS Leonard ‘Nipper’ Read. The target of these raids was organized criminal gang that surrounded two East End gangsters that have passed into London folklore and garnered more column inches, True Crime books and documentaries, than almost any other ‘villains’ in the modern age.

Ronnie and Reggie Kray are the archetypal British gangsters, up there with American ‘anti-heroes’ like Al ‘Scarface’ Capone, Johnny Torrio, and ‘Lucky’ Luciano. Two blockbuster biopics have presented the ‘Twins’ as violent and troubled rogues whose criminality and ruthlessness is still tempered with some sense that were not ‘as bad’ as modern criminals are today. They only hurt ‘their own’, and they were nice to their mum (Violet Kray), so the story goes, and they didn’t deal in drugs.

Let’s start with some of the facts about Ronnie and Reggie before considering quite why it is we remain so fascinated with them 50 years after their arrest. Born in October 1933 the Twins grew up in the East End of London, going to school in Brick Lane. They were very much a product of the mixed demography of Whitechapel and Spitalfields, with English, Jewish, Irish and Romani Gypsy ancestors. The East End was somewhere you ‘survived’ more than lived in the 1930s. This was an area long associated with poverty, overcrowding, immigration, and crime.

The Twins became involved with violence and street gangs very early in their lives and even a spell of national service in 1952 did little to tame them. The bought a snooker hall in Mile End and by the end of the 1950s were well-established local gangsters with a reputation for violence. But the boys were not content to be one of several gangsters they wanted to be THE firm in London.

As the post war austerity gave way to the ‘swinging sixties’ Ronnie and Reggie became part of the London ‘scene’. Their West End nightclub attracted the stars of the day many of whom enjoyed the infamy of being pictured with the Krays. For the Twins themselves their celebrity status gave them some much needed ‘respectability’ within London society.

It is hardly surprising that Ronnie later wrote that at the time ‘me and my brother ruled London. We were f****** untouchable’.

Of course such high profile behaviour brought the Twins into the cross hairs of the police, especially when their rivalries with other London gangsters (like the Richardson brothers in the south) or their own internal and personal issues ended in murders. On 9 March 1966 Ronnie Kray shot dead a member of the Richardson gang as he sat at the bar in the Blind Beggar pub on Whitechapel High Street. George Cornell’s murder was a very public act, demonstrating Ronnie’s belief that he was ‘untouchable’. He wasn’t.

Then in October 1867 Reggie, egged on by his twin, murdered Jack ‘the hat’ Mcvitie, a member of the Kray’s criminal organization who had supposedly tried to swindle them.  From this point on the Twins were wanted men and it was only a matter of time before the police managed to arrest and charge them.

In March 1969, after a trial at the Old Bailey, Justice Stevenson famously declared that ‘society  has earned a rest from your activities’ and sent the pair to prison for life. The next time they saw the outside world was in 1982 when they attended their mother’s funeral. By that time Ronnie was in Broadmoor, having been certified ‘insane’ in 1979. Ronnie died in 1995. His twin was interned in Maidstone Prison until 1997 when he began a series of moves before his death in 2000.

Most people have heard of the Krays and have seen that iconic David Bailey photograph. They rose to prominence in the 1960s and their celebrity status has perhaps helped to mask the reality that these were two very brutal individuals. Both of the recent film biopics present the violence (and Ronnie’s mental illness) but temper it all with the prevailing notion that they were somehow ‘decent’ working class lads simply trying to survive in a harsh world. They loved their mum and they never forgot where they came from. This is a very similar narrative to the one that surrounds the rise of the Mafia firms in New York and Chicago after the First World War.

We have popular culture and the rise of the movie to thank for this. Some of the most watched films of the 1930s (Hollywood’s golden age) era featured gangsters at home and abroad, and the image of the suited criminal complete with ‘Tommy’ gun, homburg hat and the obligatory ‘dolly bird’ became synonymous with ‘cool’.

Perhaps because the early gangsters traded in ‘bootlegged’ alcohol (banned by the US government in one of the worst decisions it ever made) and then desperately tried to reinvent their operations as legitimate businesses, we don’t see them for what they really were: ruthless, murdering, criminal organizations. It was when they thumbed their noses at the authorities or their activities impacted ordinary citizens that the authorities felt they had no choice but to hunt them down.

The Krays (much more so than the Richardsons it seems) were OUR gangsters. They showed that we too could have some ‘proper’ criminals to rival the Mafiosi across the pond. In recent years the BBC have revived the memory of Birmingham’s Peaky Blindersand transformed their relatively mundane criminal careers, turning them into gangsters that were able to give the Mafia a run for their money. The ‘Blinders have become anti-heroes to be looked up to which is exactly how the Twins wanted to be seen: as respectable businessmen who only used violence when it was absolutely necessary.

Like all True Crime myths, the idea that the Krays were ‘respectable’, ‘decent’ or eschewed violence expect when it was ‘absolutely necessary’ is a fiction and it is the job of History and Criminology to keep reminding us of that.