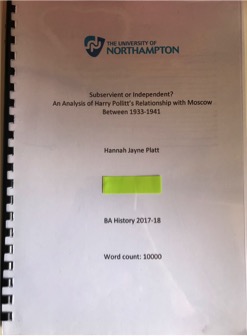 The ‘D’ word is often most feared when you are studying your undergraduate degree, that is until you reach third year and there is no escape from it. I remember when I started undergrad and I thought to myself ‘How am I ever going to be able to write 10,000 words? Let alone find a topic to write those 10,000 words on.’ However, by the end of second-year the skills that I had acquired over the two years had left me feeling prepared enough to take on a daunting research piece.

I hope that by discussing my own experience it will leave you feeling less nervous, and more expectant of what is to come. In addition to this, I have also provided some top-tips along the way!

For me, towards the end of second-year I roughly knew what historical area I wanted to focus on, and that was Communism. This was extremely broad which is something that should be expected when you are starting out and thinking about the dissertation. You will not have a niche topic straight away.

As I had an area in mind (accomplishment!) I arranged a meeting with the specialist supervisor for this, who was Paul Jackson. We met to discuss how I could move forward. The meeting made me aware of the various limitations that I could encounter by choosing this area of History, specifically issues surrounding language barriers. To overcome this I decided to focus on British Communism, mainly from a British perspective – this meant that I did not use Soviet sources unless they had already been translated.

So, I now had a more focused topic area, but I still needed to find an original idea. In the beginning stages, this might be the most stressful part. It definitely was for me. I spent hours reading historical work on the Communist Party of Great Britain (CPGB). Bingo, I noticed that there was a strong debate between historians that had been playing out for years over how much control Moscow had over the Party. It was something that caught my eye and that I found interesting.

The debate in the historiography had mainly focused on the CPGB as a collective unit, ignoring that different views could be (and were) held within the party. What I also found interesting was that there was no case study on Pollitt’s own views and actions, and how this may have impacted the party. After all, he was the General Secretary for two tenures, totalling 25 years. I decided that I wanted to look at how independent or subservient the leader of the Communist Party of Great Britain, Harry Pollitt, was to Moscow between 1933 to 1941.

The  assessed Research Proposal at the end of second-year was a useful opportunity for me to navigate my way through the current secondary literature and the ongoing debates. It is definitely a useful tool to get students into the mojo of thinking about their research project, the limitations that they will face and how to overcome these. By picking a topic that I was genuinely interested in, I believe I made the overall process slightly easier for myself. It was less tedious researching when I had hit a road block and I was more determined to overcome any that did appear.

I found researching the most enjoyable part of the process. However, it required lots of planning and organisation. Many of the sources I used were either held at the Peoples History Museum (PHM) in Manchester or at the British Library (BL). I used the summer before the beginning of third-year to visit both. Admittedly, I only went to the PHM once and sifted through roughly 23 boxes of sources in a day, taking pictures as I went along and analysing them later on. I was lucky enough that what I acquired was suffice but by starting early it gave me enough time just in case I needed to visit again.

The BL was far easier to visit due to its geographical location, but I managed to find a useful hack in the University’s library system – I began requesting the sources held there via inter-library loans and they were coming in, therefore saving me multiple journey’s to London (the excitement was unreal).

Inter-library loans are something that you should make your best friend throughout third-year – whether you are using it to request secondary literature or being sneaky like I was and using it to acquire some of your primary sources. It will save you bags of time and allow you to access some key literature that the University’s library does not hold. Also, if the due date is coming up and you need the book for a bit longer it is worth emailing Genine O’Neill (who runs inter-library loans) to ask for extensions. I had a few books sent in November and I returned them after I handed my dissertation in, so it is always worth asking. 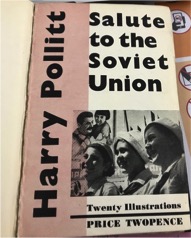 Primary Source held at the BL

Do not be surprised, or panic, if you find that you still need to go back and find one or two primary sources when you are writing, or that you need to read over secondary literature a few weeks before the due date. Try to get as much done in the months leading up to writing so this does not feel too laborious. It is easy to panic and become a stressed out mess, especially when course friends might be 1,000 words or a chapter ahead of you, but everyone moves at their own pace and focus on what you are doing.

Everybody’s project will be so different so try to avoid drawing any comparisons.

Writing and the Final Touches:

In November we were expected to submit our introduction, similarly to the Research Proposal, it was a useful exercise. It encouraged me to think about various elements of the dissertation, including its structure and how each chapter would work to make one strong, whole piece. It did need rework as things changed once I began writing my chapters but I left this as one of the last things on my ‘to do’ list. Nevertheless, I had 1,500 words already written and five months still to go so there was no complaining at all.

I personally found the get-go of writing my first chapter difficult. I was used to writing essays but the dissertation required me to apply different skills, specifically the ongoing analysis of primary sources woven into a consistent argument. I met with my supervisor twice to discuss how I would kick it off, and a piece of advice that stuck with me throughout was to ‘take control.’

I also quickly realised that I needed a solid structural plan of each chapter to prevent me going off topic or becoming confused with what I was actually supposed to be doing. As I began writing my first chapter in mid-to-late January it meant that I had more time to get to grips with what I needed to do and play around with my writing style. I found my second chapter much easier to write after this but I would definitely recommend starting as early as possible.

In terms of the ‘final touch ups’, such as references, the content page etc., leave these until last, but make sure you reference as you go along. I recommend not doing ibids until its complete. This is something that I was very thankful that ‘past Hannah’ did not do when I finished the piece, especially as I had to cut 2,000 words (can you imagine if I had done my ibids and then cut?). In addition, make sure you give yourself plenty of time to proof read and get others to read it too. I had five proof readers in total and having multiple fresh pairs of eyes on my work really helped.

Set yourself a date of when you want it to be finished by, before the deadline, to give yourself time to go over it properly. You will thank yourself later.

Overall, the dissertation is nothing to fear, as long as you plan and organise, and see or email your supervisor regularly then you will be fine. Good luck!

Hannah Platt, who graduated from her History degree in 2018 and is now embarking on MA studies at University College London