It was the best of times, it was the worst of times.  Depending on how you voted.  Our project was born in Dundee on the evening of Thursday 23 June 2016.  The Dil’Se restaurant provided some great food, ideas were discussed, questions were half-formed, and possible lines of inquiry scribbled down.

The following morning, we awoke to the EU referendum result.  Although we never consciously entered into a race with the Conservative party, having simultaneously started something that was initially ill-defined and then unexpectedly complicated, we do feel slightly smug in having crossed the finish line before them.

The initial impetus to research and write came from a sense of unfinished business.  Nine months before our meal I had published the diary of a First World War soldier who had been engaged in frontline signals intelligence (SIGINT).

Editing the diary had caused me to do some research on IToc (aye-tok), the British army’s system for intercepting German trench telephones, and to also look for the service records of the SIGINT soldiers whose names popped up in the text.

And it turned out that I’m not very good at rummaging in personnel records.  Enter stage left my old friend, Jock Bruce.  He’s a genealogical ninja and, I think initially out of pity, demonstrated that I was giving up too easily when confronted by hundreds of hits on common names.

Jock’s main historical interest is early Twentieth Century SIGINT and so, while I moved on to other things, he pushed further into the personnel files.  We also batted emails back and forth about another problem; some of the diary evidence just didn’t fit with previously-accepted interpretations.

Jock then had a breakthrough.  From the diary we knew that men who were recruited into this type of work were transferred to the Royal Engineers (Signal Service).  But there were over 200,000 Royal Engineers in the First World War.  How could we identify the couple of hundred who were designated as ‘Interpreter Operators’?

Taking the two dozen names that we had from the diary, Jock tested a hypothesis.  What if these men had been transferred to the engineers in batches?  Administrative logic would suggest they would have been allocated new service numbers in sequential blocks.

Through a process we dubbed ‘numerology’, Jock started searching for engineers with service numbers close to those of men identified in the diary.  This unlocked many fresh targets and we quickly realised that, using their service records, we could build up a useful collective profile of these men.  Or, to give it its proper academic label, engage in some prosopography. 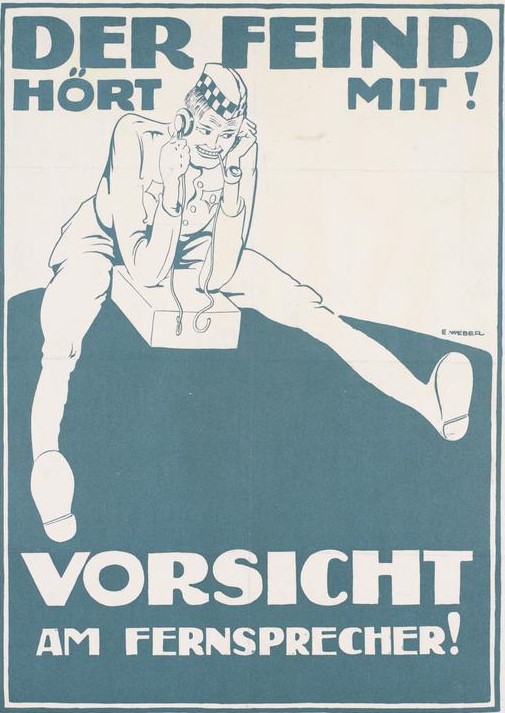 ‘The enemy listens too! Careful on the phone!’

Over the curry in Dundee we had decided to write a short article which synthesised the existing secondary sources with the evidence from the diary, plus a couple of thousand words on the personnel dimension derived from Jock’s genealogical work.  It all sounded so simple.

But then it spiralled out of control.  We found ourselves investigating multiple leads and producing many more questions than answers.  But we persisted.  Mostly from a combination of curiosity and obstinacy.

The next forehead-slap moment came when we both dug back into our old notes on First World War intelligence.  We found numerous examples of both of us having both looked at documents without realising the potential significance of the trench SIGINT references.

While re-tracing our steps in well-known sources, we also began trawling new ones, such as local newspapers, using terminology found in the diary.  We got lucky in finding, for example, one officer who decided to spill the beans about his secret SIGINT work to a community group in Berwick-upon-Tweed.  We were also aided by the kindness of numerous First World War historians who responded very generously to our strange enquiries about obscure aspects of their past and present research.

Then came the hard part.  Writing up.

It quickly became clear that we’d accumulated too much material for one article.  We wrangled with various configurations, but eventually ended up writing two; one focused thematically on the personnel and the other, structured chronologically, on the SIGINT.

Neither of us had co-written academically before, and it’s fair to say that it was quite challenging.  What we learnt was that, having known one another for many years, we found it relatively easy to engage in a critical-but-creative dialogue conducted mostly by email.  That said, we both realised early on that writing this way takes much more time than flying solo.

Eventually, we submitted to the Journal of Intelligence History and found the peer reviewers to be firm yet fair.  A little further digging thereby ensued and, happily, we were waved through at the second time of asking.

Would we do it differently if we had our time again?  Probably not.  Yes, we made mistakes and could have been much more efficient in pursuing leads.  We also discovered just how strangely obsessive each of us could be in pursuing divergent aspects of the investigation.  But, ultimately, by working together, we have researched and written something that neither of us could have done alone.

Please have a look at our work using the links below.  And tell all your military and intelligence history friends to do the same.  There should be something in there for everybody; perhaps the German intelligence advantage during the Battle of the Somme, security concerns about using immigrants for secret intelligence work, or eavesdropping on the conversations of enemy prisoners.

Finally, we are most grateful to the University of Northampton for funding open-access.  And we also thank GCHQ for recently publicising the names of the Interpreter Operators.

2 thoughts on “A Tale of Two Articles”