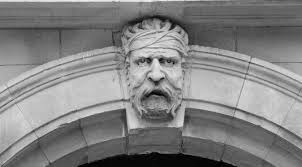 On Monday this week I removed my second-year class on crime and punishment from the confines of a Waterside campus classroom (lovely as they are) and transported it to a real life courthouse in the centre of Northampton.

Northampton’s Sessions House was built after the fire that destroyed much of the town in 1675. This gave the local authorities the opportunity to create a purpose-built space to hold the biannual county assizes and the quarterly sessions of the peace.  There are two courts in the complex – one for criminal and one for civil cases – both have had some significant modernization since the late 1700s but plenty of the original courtrooms have survived.

Below the courts are holding cells, and it is still possible to access the ‘walk of shame’ that would have conveyed commended prisoners to the gallows that was situated towards the rear of the complex.  Still possible, that is, so long as you have a friendly and well-informed guide like Dr Alan Clarke, our friendly expert in local English history.

About 30 history undergraduates take my level 5 module (HIS2010) at the University of Northampton and in last week’s class we had looked at the nature of the court trial in the eighteenth century, at the role of the judge and juries, and considered the importance of architecture in the process of the administration of ‘justice’.

This is quite limited in a modern classroom when your key resources are contemporary written accounts and images like this one (of the Old Bailey in the early 1800s).

My students have just embarked on a project that will see them reenact a real trial using the published records of London’s Central Criminal Court in the past and so I was keen to let them get a sense of what a trial might have been like. I rather enjoy the idea of ‘experiencing’ history where possible, even if (thanks goodness) I can’t begin to experience the fear of being tried for an offence for which I might pay with my life if convicted.

Alan took us on a tour of the court complex – the cells (where evidence of their recently past can be seen in the surviving graffiti from the 1970s and 1980s), the judge’s chambers, and the nineteenth-century gaol block.

He also described the interior of both courts, pointing out and explaining the symbolism woven into the intricate plaster work (the work of Edward Goodge). Over the judge’s chair in the criminal court are emblems representing truth, justice, material wealth (and its opposite), as well as the image of the devil complete with a tongue which supposedly wags when someone tells a lie in court.

Having settled the class back down after our tour I now gave individuals roles to play as we reconstructed two short cases from the Old Bailey Proceedings in the 1700s. The first was the trial of a domestic servant who had given birth in secret and was accused of ‘destroying’ her illegitimate child. The trial took hardly any time at all to find her guilty and to condemn her death and anatomization. The evidence was limited, the few witnesses that spoke up for her were ineffectual, and this made a deep impression on the class as we unpacked it afterwards.

The second case was no less brutal; another young woman, this time accused of killing man because he called her ‘a whore’. Despite the evidence of intent being almost nonexistent and contentious (the knife she used had a rounded blade, hardly likely to have inflicted the wounds described by the witnesses that spoke against her) she too was convicted and sentenced to hang.

Both cases revealed that respectability and class played a more important role in the eighteenth-century courtroom than evidence did. But more than this the very act of voicing the words spoken in a real court space helped us understand how the various actors were perceived. There is a very different perspective sitting (as the student playing the judge did) at the apex of the court looking down on everyone else, than there is looking up from the dock, knowing that behind you is a staircase (merely ladder when the court was built) to the dark cells below.

In January these students will be back in court so that they can put on their own assessed trials. They have 15-20 minutes to reenact a case of their choosing before myself and a colleague will discuss what they have learnt from the process and how it has shaped their understanding the criminal justice system of the past.

Of course, we can’t possibly experience history in the way that people did in the past: there were plenty of giggles as students placed in the dock or ‘locked’ into a cell but engaging with history in this way does bring it alive. Taking students out of the comfort of a classroom changes perspectives, mine as well as theirs, and I think we ought to do it more often.