Since 22 February 2019 Algerians have been protesting in the streets. As usual there has been very little coverage of events in the British, indeed Western, media. This is, however, one of the most impressive pro-democracy movements the world has seen. It was triggered by President Bouteflika’s decision to stand for a fifth term of office. This flew in the face of the Algerian Constitution, and would have meant that he would have added an extra five year term to the twenty he had already served as Algeria’s longest-serving present. To further breach constitutional matters, Bouteflika had rarely been seen in public since 2013 when he suffered a stroke, and article 102 of the Constitution states that an incapacitated president must stand down. Since his stroke in 2013, perception grew across Algeria that Bouteflika had been a puppet president, with figures from within Bouteflika’s entourage calling the shots.

On 10 February 2019, a press release signed by the long-ailing Bouteflika announcing he would seek a fifth consecutive term provoked widespread discontent. After Friday prayers on 22 February  Algerians took to the streets. This effectively shattered a longstanding fear of protest in Algeria after the Black Decade of the Civil War of the 1990s. Millions of men, women and children took part in peaceful rallies across Algeria, and have been protesting ever since.

The protests, which have been dubbed Algeria’s Hirak, which is Arabic for ‘movement’, took on a broader focus when Bouteflika finally ceded to pressure and resigned in April 2019. Protestors then called for action against the failures of the privileged elite who had supported him, and in doing so had failed public services in Algeria. The protestors  called for widespread reform, and for corruption charges to be brought against the regime’s generals and oligarchs.

Bouteflika’s  long regime had  effectively crushed political dissent and oversaw a proliferation of corruption throughout the state, with oligarchs and the party elite owing their position to the monopoly on oil and other key energy industries. Algeria is one of Africa’s major oil and gas producers, the endemic corruption has led to an overreliance on oil revenues at the expense of the agricultural potential of the country, further adding to discontent on the domestic front. Additional factors including high unemployment, lack of job opportunities, economic stagnation following the decline of oil and gas export revenues in 2014, social inequalities, have led the Algerian population to protest against ‘le pouvoir’ (the people in power. Although forcing Bouteflika’s resignation in April 2019 as a result of the mass protests was a major achievement, the momentum was with the protestors, and the Hirak forced further concessions. 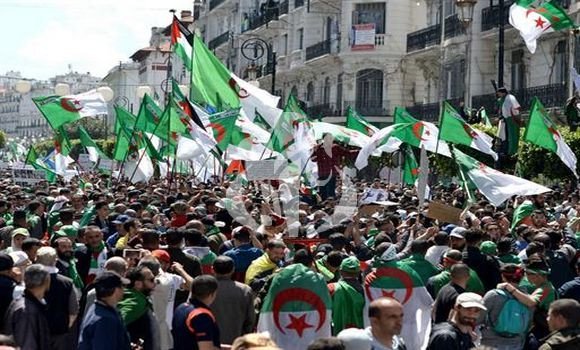 The strength of this Hirak, also known as the ‘Revolution of Smiles’, is that the protestors seem to have learned the lessons of the Arab Spring. Millions of people, both men and women, who mostly young, are participating in the weekly marches, occupying public spaces and peacefully demanding the regime to change. The fact that this is a movement with no official leader, but which is seeking dramatic change through entirely peaceful means, appears to have prevented the emergence of extremist groups, as occurred in Libya and Syria. The movement also has a significant cultural component, and has witnessed the proliferation of creative endeavours: songs, slogans, cartoons, the occupation and collective clean-up of public places, spontaneous dialogues and debates, and very active social media. The abiding cry has been: ‘Yetnahaw Gaa’ / ‘Get them out!’

When finally a new election was called for December 2019, this was largely rejected by the movement, who instead called for a complete overhaul of the political system. As the protests grew louder, the response of the government was to clamp down severely on detractors, and the number of arrests increased significantly.  Protestors are recording increasing internet censorship, and political cartoonists have been arrested and imprisoned. Amnesty International’s ‘Algeria Watch’ reports of around 500 arrested, some arbitrarily, as a result of a sweeping government action against the Hirak. (see https://www.amnesty.org/en/latest/campaigns/2019/12/algeria-hirak-protests/)

The election went ahead on 12 December 2019, and the result was controversial.  Abdelmadjid Tebboune, a Bouteflika loyalist was elected as President. Protestors chanted ‘The vote is rigged. Your elections are of no concern to us and your president will not govern us.’ One protestor stated: ‘Tebboune is worse than Bouteflika, We did not vote and we will not back down.’ Little news has emerged in the West since the election and the protests which followed. Has the Revolution of Smiles turned sour?