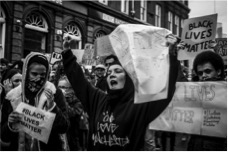 Today it is the turn of Sabrina, another of our wonderful bunch of History undergraduates at Northampton, to share her experiences of the Black Lives Matter movement and why she was inspired to get involved.

Growing up I was surrounded by racist comments, which living in such a culturally diverse place that was Bradford confused me. I constantly heard comments from family and family friends about how anyone who wasn’t a white British person ‘should go back to their own country’, they should ‘stop stealing our jobs’, and as a six year old I didn’t understand because I knew people and were friends with people who weren’t white, I knew they were born in England so how could they go back to their own country when this is where they were born?

So, from a very young age I have always stuck up for people who were Black or Asian because they were the same as me and did not deserve the mistreatment they were receiving.

George Floyd’s death caused outrage and rightly so. I watched the video and I cried, how anyone can so calmly apply so much pressure onto someone’s neck that they are pleading with you to get off and that they cannot breathe is beyond me. I was angry that this is not an isolated incident and I wanted to be able to make a difference and to me sharing things and signing petitions was not enough.

I wanted to take action and make the loudmouth I have always used, in moments of injustice, heard. I saw the protest event on Facebook and immediately decided I was going.

Being white I have privilege. My life may not have been privileged but the reason for that was never because of the colour of my skin, my skin colour has always been on my side and it makes me angry it is not the same for everyone. I decided this was my opportunity to use my privilege to help make a change because until white people start making changes and educating racists and being the voice that black people need, then a change cannot happen.

We cannot become a country of justice until we as white people speak up against the injustice.

I was apprehensive as to how many people would turn up, I was hoping for a big turnout but I’d lost faith in humanity over the last month or two so thought there would be maybe a hundred or so people who turned up. I was shocked to learn that 800-1000 people turned up. My faith in humanity was slightly restored. The organiser chanted for roughly 20 minutes and then he was done but said we could hang around and that is when the public took it upon themselves to chant things they wanted to. There was one person who took charge of some chants but eventually asked for help otherwise his voice would not hold out.

This was my opportunity to use my voice, I started chanting “I can’t breathe” and everyone joined and in this moment I felt I was making a difference but I wanted to make an impact, I laid on the floor whilst chanting and the majority of people joined in, which really made me emotional.

United we stand, divided we fall.

We were making history and I was glad to be on the right of history and as a history student this was so important to me.

I finally felt like I was doing something good. This was not the only time I led chants; I wanted my voice to be heard, on behalf of black people, but I wanted people who didn’t understand that white people were fed up with racism too. I have been lucky enough to never have experienced racism, I will never understand what it is like fearing for my life if I am stopped by the police and not a single person should have to fear that. But witnessing people who have faced racism whether that be because of the colour of their skin or the country they come from, is something I have always had to experience and stand up against.

The protest was moving, it opened my eyes more than they were before. I heard stories that made me cry.

I heard one man talking to a small group of people about how he had to tell his four year old why she’s different to everyone else and how not a single white person has ever or will ever have to do that.

The question I ask myself is: why was I leading a chant, with the words “hands up don’t shoot”?

Because UNARMED black people are shot and for what?

Because the colour of their skin makes them look a threat?

Yet ARMED white people are not shot, yet they truly are a threat, especially when they are shooting up schools.

The question I ask myself daily is: why is ending racism causing such a debate? Why are people more bothered about statues of slavers being taken down than they are about innocent lives being taken by the people who are supposed to protect them? Why in 2020 do people still think they are better than everyone else just because they are white?

When in reality there is only one race and that is the human race.