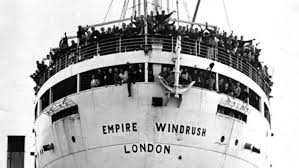 Last week we showcased a series of blog posts written by History (and Joint Honours History) students at the University of Northampton. Today we have another, from Amelia, who has just competed her first year at Northampton studying History and Media Production. Again, this is a very personal reflection and it contains language which might cause offence out of context.

Thank you for inviting us to share our thoughts on the recent events in the USA and the issue of racism in our society.

My Grenadian Grandmother arrived in this country in the ’50’s and would be described as part of the Windrush generation. My British-Guyanan Grandfather would have done the same, except he pretty much immediately joined the military. Those parts of my history I know almost nothing about, I just know that’s how my mother got here.

I was five years old when I asked my mum if she knew she was supposed to have made me White when I was in her tummy. At this age in school, I was being asked to sit at the back of the room because the smell of my hair moisturiser made my teacher feel sick.

I was seven or eight when the concept of ‘poo-skin’ was brought to my attention. I was in secondary school when I was first told to ‘go back to my own country’ and eighteen when someone shouted ‘nigger-bitch’ from their car when I was walking into a shop. So, you can see, from an early age, I knew I was different and even at that young stage I could feel the difference was that, I was less worthy.

For the experiences I have shared above, I know racism exists in this country.

Yet, over the years I have learnt how to be a good British Black kid, to not mention the racism or the comments, to take it on the chin and keep pushing, to make fun of myself before other people could, to tell the racist jokes first before someone else did, to make White people feel comfortable around me by letting them know if their offensive comments came out accidentally I was ‘not like the others, you can say what you want in front of me’.

That was how I survived my situation, and I am deeply ashamed.

This is an important point because in my opinion its one of the main differences growing up in Britain vs America. In America they are open about their racism so if you are Black you kind of know where you stand, but in Britain, we are extremely good at pretending there is no issue at all, which makes gaslighting even more common.

When you experience your life in this way it has effects on your mental health, self-esteem, self-worth. I was sixteen when I first attempted suicide and that is not a coincidence, it is also not entirely down to racism either.

What will help us going forward is for society to understand that racism becomes part of your personal context and effects the way you conduct and value yourself, this does not mean we throw personal responsibility out of the window, there are plenty of choices I decided to make that stopped me from succeeding in life.

When I started going out to clubs and bars, I made more friends, gay friends, mostly White. They called me Black Amii so they could tell me apart from the other girls called Amy, my other Black gay friend, they called Shanigga, because her name was Shanice. We welcomed it, we were in, we were not equal but we were in, and that was enough for us at the time.

I’ve managed to live the majority of my twenties avoiding the topic of racism in my everyday life because it has always felt like a losing battle.

There are no words to describe to White people what it feels like growing up feeling like you do not belong, feeling like you should any day be returning to the country you are from where you will feel welcome and be whole, a dream-like state you can put yourself in to avoid the truth that you are from Britain and the Brits don’t want you.

Soon I’ll be thirty and it is only now that I know I am supposed to be here. I am almost thirty years old and I genuinely believed I did not have a right to be in this country!

The problem is my mother is not of dual heritage, she has two Caribbean parents and has dark skin, so you can imagine upon hearing my experience how much worse hers were and are, especially growing up Black in the ’70s, you can imagine the effects of her experiences. She was in no position to teach me or my sister how to be proud of our heritage because she had spent her whole life being told it was ugly and nothing to be proud of. We are all trying to do better now.

Why did I not have the tools to fight back? Why did I not have the knowledge to tell my bullies that my ancestors were invited to this country by their ancestors and together they re-built Britain from the ground up. I lived in the heart of Bristol for two years and had no idea the streets I walked on were once walked on by slaves!! I feel such shame at my ignorance.

I have got no idea how we remove this deeply ingrained disease that is racism in our society but I’m pretty sure it starts with knowledge. I never imagined I’d make it to university but I plan to learn about how I got here and how the story of my ancestors’ ties into the world we live in now because I know for whatever reason, that side of the story has been omitted from history. If I can change that in any small way I hope I get the opportunity, I hope that by studying History I will gain the knowledge I need to teach others and I hope that by studying Media Production will learn about the mediums in which I can present and share them.

It has taken hours to write this because it is in my very nature to shy away from these difficult conversations because of the pain it evokes, I have no energy to argue with anyone who doesn’t want to hear my story and understand there is more to be done. I have felt this so deeply I have been unable to say one word on the murder of George Floyd for fear I would lose the White people in my life I have spent so many years trying to be accepted by.

Again, I am so ashamed of my silence and so sad that I have spent portions of my life wishing I was White because I didn’t know my skin was beautiful. I am trying to do better now.

When I see my White allies share their messages of support online it brings tears to my eyes because it is something I have always wished for and never seen. For the first time I have hope that I can share my experiences without being shut down or questioned, gaslighted. I have even reached out to some of them to thank them for their support. (Can you imagine having to thank someone for not being racist?) But I do thank them, because it is not easy to argue with your friends and family on an issue that does not directly affect you, so to those that have done just that, you have made a difference to me and many other Black people who were absolutely certain that George would die and the world would watch and forget.

It fills me with hope, that for some reason THIS murder of a Black man in the USA has caused this global uproar, it feels like something is different this time, that people really are taking notice. Perhaps its COVID, perhaps the world is so still and silent for once that we’ve been able to open our ears and hear each other. I feel the world has had the rug ripped from underneath it change is coming, a change that will make this world a better place for us ALL.