This report is by Joseph Price, one of our first year undergraduate students.

35 years ago, on the 29th June 1985, London’s gay pride parade received some very unlikely supporters who saw it their duty to show their support for a community who had helped them survive during tumultuous times. The supporters were bus loads of Welsh miners whom had been touched by the overwhelming generosity of the group, ‘Lesbians and Gays Support the Miners’ or LGSM.

In March 1984, Prime Minister Margaret Thatcher issued a major industrial shut down of coal mines up and down the country which spurred a yearlong strike. The small towns that relied on these mines were to be hit the hardest, with no income, no food and no governmental support, all seemed lost. They were harassed by the police and the change in public opinion left the miners and their families in destitute. Thanks to Mike Jackson and Mark Ashton, founding members of LGSM, a collection was formed to raise money to sustain the miners and their families, this money was collected at gay pubs and clubs as well as from buckets in the streets. The biggest fundraising event was the ‘Pits and Perverts’ benefits ball held in London in 1984 which raised £5,650 (equivalent to £20,000 in today’s money). 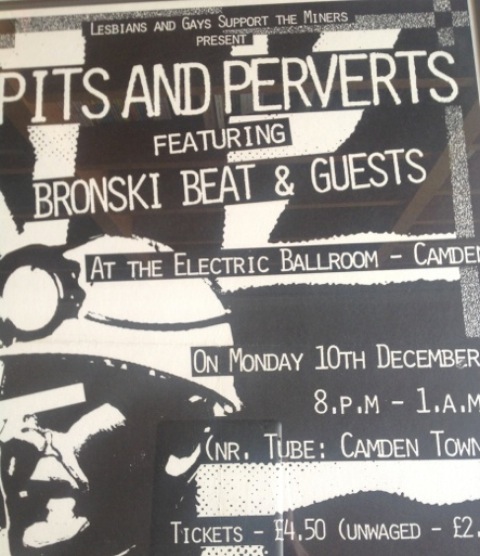 ‘…you know what harassment means, as we do. Now we will support you.’

The events that took place were based upon having a shared experience. The miners had fallen victim to the oppressive forces of the government, media and police, something the LGBT community had long been suffering from. LGSM stands to be one of the clearest acts of solidarity in gay history, instead of simply ignoring the issue, the community banded together to help another in distress. This alliance saw an impact, not only socially but politically as well. After the strike ended, a motion was finally passed to place Gay and Lesbian rights into the Labour party manifesto, though this had been raised before, it had never been approved due to a block vote from one key union- The National Union of Mineworkers. So, thanks to the selfless acts of solidarity shown by the LGBT community, the miners accepted placing gay rights into the Labour party’s agenda, stating their slogan, ‘Miners supports Gays and Lesbians’.

One thought on “A story of Solidarity: Miners and the Gay Community”