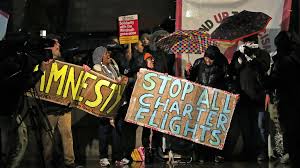 Clearly we need to have the full details of those individuals who have today been deported from the UK to Jamaica. However, the Home Office was forced to remove well over half of those they wished to deport after last minute appeals that they had not had their cases properly represented by lawyers. Which begs the questions of what have these people done and is it ever right to deport someone from the place they call ‘home’?

‘We make no apology for trying to protect the public from serious, violent and persistent foreign national offenders.’

Sajid Javid has argued that all of those being deported were ‘Jamaican nationals who have been convicted of criminal offences and served prison sentences of 12 months or more’.

Opponents of the deportation have suggested that at the very least these people have not all been given the opportunity to contest their deportation in the courts. Detention Action– a charity which works with those held in immigration detention centres  – claimed that poor communication at the centres in which the detainees had been held meant they couldn’t access legal support.

The High Court upheld this injunction in at least 30 of the 50 cases of those scheduled to be flown out of Britain this morning.

‘Yesterday we gathered shocking and damning evidence that those scheduled on tomorrow’s deportation flight to Jamaica have been denied access to justice. Home Office efforts to issue new SIM cards have been flawed and patchy and people facing a life-changing removal from the UK are effectively being held incommunicado. These removals must be halted until access to lawyers has been restored’.

Speaking on BBC News this morning Sankey remarked that those being deported were being punished a second time for crimes they had already served prison sentences for. Mnay were brought to the UK as children or young adults, many had suffered abuse and grooming whilst here, and in many cases their crimes were minor and drug related. Even in the case of those committing the serious violent offences that Home Secretary Patel and Chancellor Javid were intent on highlighting, did so after living here for several decades.

Her point was that these people – whatever they have done – are, effectively if not legally, British citizens. Their offending is our problem, not Jamaica’s.

We have a history of deporting people our own citizens in this country. From at least the 17thcentury we shipped unwanted criminals to the colonies on America’s eastern seaboard – to Maryland and Virginia for example. Revolutionary war in 1776 brought the system of indentured forced migration to a close and it was far from effective

anyway, as convicts found it fairly straightforward to escape and return to England.

It was much harder for them to escape from the next penal colony however. In 1787 the First Fleet sailed for New South Wales, landing in Botany Bay and establishing a penal settlement was to last until the 1860s. Australia was an unforgiving continent from which escape was almost impossible.

Whilst modern historians have reconsidered the convict experience in the last few decades, and argued that some of those sent ‘down under’ had a better set of life chances than those left behind in the slums of London, Birmingham and Manchester, it was still a double sentence.

Most of those transported (deported in effect) to Australia were guilty of fairly minor property crimes and yet they had been imprisoned in Britain, often in unsanitary and bleak conditions, before being packed onto a ship and transported thousands of miles to endure harsh conditions in a new colony. Set to work in chain gangs, on farms as bonded labourers and servants, whilst they might work their way out of bondage it was very difficult for any of them to return ‘home’.

Britain abandoned transportation in the 1860s, preferring instead to lock up most of our criminals in model prisons like Pentonville. Notions of reform and rehabilitations often ran a poor second to those of protecting the public and punishment but at least on release those convicted could return to the communities they knew and understood.

Britain is a nation of immigrants; first and second and third (and so on) migrants from all over the world. Those from the Caribbean (whether Windrush or not) come as part of what was our empire and dominions. To uproot those that have made their home here (however badly they have lived their lives since they arrived) seems to be piling further punishment on top of that imposed by a judge at trial.

To me it smacks of cruelty and an abrogation of responsibility for people whose crimes were committed here, not in Jamaica or anywhere else, and as a result of the environment they grew up in, not the one they were removed from as children or teenagers.

I rather suspect that Mr Javid and Ms Patel (left) are more interested in appearing ‘tough on crime’ than they are in dealing with the problem of ‘crime’.

There is nothing new in this: it is very easy to talk tough and impress the readers of the Daily Mail and the Conservative Party conference but it will do nothing to keep the people of Britain ‘safe’ in the long run.