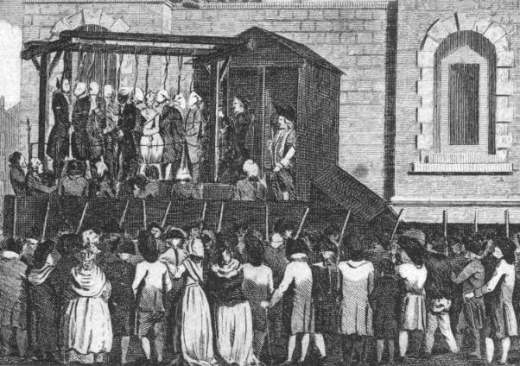 I have been researching and teaching the history of crime and punishment for well over a decade now and the field now covers considerable ground. There are excellent studies of the criminal justice systems of the past, from the medieval to the modern age, ranging across a wide geographical area from Britain and its empire, to Continental Europe, Africa and the Americas.  There are articles and books on the evolution and development of policing, the rise of the prison, and on different types of criminal activity. Researchers have studied homicide, highwaymen, fraud and forgery, shoplifting and pocket picking; they have looked at juvenile criminals, at female felons, and at (most recently) at the huge numbers of men and women transported to Australia.

Some of the earlier work in the history of crime – and I’m going back to the 1970s and 19780s now – set the scene for much of what has followed. Researchers like Douglas Hay and others that studied under Edward Thompson at Warwick, produced wonderful polemic work that critiqued the hanoverian justice system. They exposed the class bias at the heart of the English criminal justice system that selected its targets from the young working class men who robbed and stole from those better off than themselves.

Peter Linebaugh’s study of eighteenth-century London (The London Hanged) and Thompson’s  own Whig’s and Hunters are, with Hay’s seminal edited collection (Albion’s Fatal Tree), examples of left-wing revisionist histories of a Georgian justice system that seemed to have very little to do with ‘justice’ itself. As another firebrand of this sort of history, VAC Gatrell,  declared that the history of crime is a dirty subject because it is about power, not about crime itself.

Gatrell’s own magnum opus, The Hanging Tree, remains one of my favourite books both for its depth of research and the power of his prose. These pioneers in the history of crime redefined the way we studied this history, borrowing as they did from the wider field of social history, to place the criminal centre stage and, and this is important, raise him up as a victim of the justice system.

The Digital Panopticon, which launched late last year, traces the steps of those uprooted from their communities and dumped on the unforgiving continent of Australia in the late eighteenth and early to mid nineteenth centuries. Michel Foucault and later Michael Ignatieff’s work on the Victorian prison system also paints a bleak and desperate picture of men and women ground down and destroyed by a heartless penal system.

In short then the history of crime and punishment has mostly (since the 1970s at least) been a history of how the state has brutalised those caught up in the criminal justice machine. What is largely missing from the story is that of the victims of crime.

Now, I understand why this was the case in the early years. Historians (particularly those of the left) were keen to show that working-class people had agency, that they were not simply condemned to the ‘condescension of history’ (as EP Thompson put it). Along with work that highlighted the fight for customary rights, the vote, resistance to oppression and creeping capitalism these historian created ‘social bandits’ and heroic highwaymen. More clearly, and less controversially, they attacked the state and its mechanism of social control.

But is it now time to think about the victims of crime? After all, since the late twentieth century the right of the victims of crime have increasingly been placed on the agendas of legislators and criminal justice commentators. Modern criminology does acknowledge that victims need to be both seen and heard; restorative justice has gained ground and recent debates about the release of John Worboys have re-energised calls for victims to be better informed or consulted when offenders are let out of prison.

I think we need to start to try and place the victims at the centre of our studies of crime and punishment, or at least to better understand their role and their experience. We have had excellent work that looks at the role victims have played as prosecutors, which acknowledges their ability to help secure pardons (or conditional pardons) for property offenders sentenced to hang under England’s ‘bloody code’. But what about some work on the shopkeepers in London that appear in the Old Bailey? Or the men and women  robbed and beaten by highwaymen, or those fleeced in city taverns by ‘cunning’ prostitutes? Could we try to present a history from their perspective?

It is not easy of course. We have ended up knowing a lot more about the criminals than we have the victims. Even when it comes to the most famous unsolved murder case in history – the Whitechapel (or Jack the Ripper) murders of 1888 – there is precious little on the five (or more) women who were killed, at least by comparison to the endless commentary on who the assassin might have been. At least Haille Rubenhold is working on this as I write, so that may be addressed fairly soon.

So this is a call if you like, to prospective PhD students, and others working in the field. I’m not asking us to stop exposing the cruel penal systems of the past (or those of the present for that matter), nor am I saying that everyone executed, transported, flogged or imprisoned deserved their fate, but perhaps we now need to redress the balance a little and begin to research those that suffered in a different way from the prevalence of crime and paucity of protection from it that a deterrent based system in the past offered them.

Drew writes a daily blog on the Victorian Police Courts and teaches the History of Crime at the University of Northampton.

Foucault, Michel (1975). Discipline and Punish: the Birth of the Prison.

Gatrell, V.A.C, (1994) The Hanging Tree: Execution and the English People

Thompson, E.P (1975) Whigs and Hunters: The Origin of the Black Act