As a academic historian who works on the history of crime (and most of that in London) when I was offered the chance to take a peek inside a working English prison I could hardly refuse. I run modules on crime and punishment at the University of Northampton and help students explore the changing nature of penal policy over 200 or more years from the late 1600s to the early 20th century.

So when the nice people at London Historians organised a behind-the-scenes visit to Wandsworth Prison Museum I was quick off the block and bagged one of the 10 places on offer.

Last Sunday I trekked across the capital to the imposing gates of Wandsworth Prison to meet up with the other lucky visitors and our guide, Stewart McLaughlin a serving Prison Officer and curator of the small prison museum.

We started in the museum which is about the size of a scout hut, and packed solid with neatly labelled exhibits. Stewart has gathered together an impressive collection of prison relics which he’s arranged chronologically so that it tells the story of Wandsworth from its early days (as the Surrey House of Correction) through the nationalisation of prisons (in 1878),to  its use as a military prison during the First World War, and on to the present day.

We ‘met’ famous inmates like Oscar Wilde and the man that killed Dr Martin Luther King (James Earl Ray), and some of those that ended their days inside on the end of a rope. Wandsworth was a hanging gaol and this is where George Chapman (aka Severin Klosowski – a ‘Ripper’ suspect), John Haigh and the wartime traitor William Joyce (‘Lord Haw-Haw’) were all executed. We saw Albert Pierrepoint’s execution rope and other memorabilia that reminded us that until 1961 murderers were still being ‘dropped’ at Wandsworth. 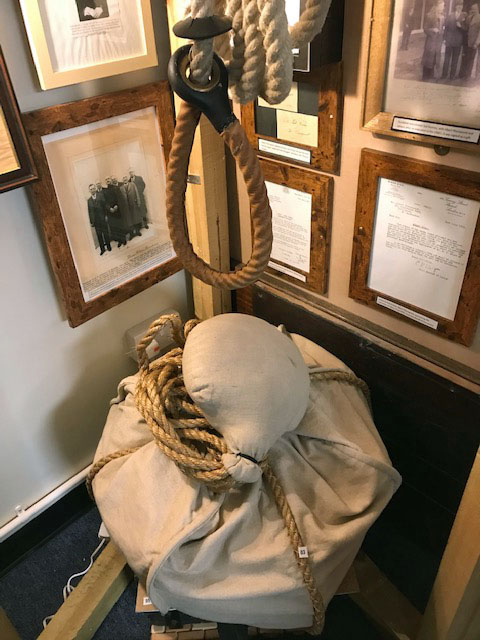 The exhibition is a fascinating glimpse into the prison’s long history and Stewart has pieced it together with considerable skill (and limited resources!) This is an example of one man’s efforts to preserve and display history and one wonders what will happen when he decides to hang up his keys for good.

It is one thing to be allowed to peer into the past via an exhibition of the artefacts of penal history, it is quite another to be invited to walk through the  gates of a working prison. This is exactly what we all did next though, carefully moving under Stewart’s guidance from the reception area to the large open star that links the five man wings (A to F) together. This central boss used to allow officers (then warders) to see right down each wing and control the prisoners. Not quite a panopticon as Jeremy Bentham envisaged his ‘inspection house’ but effective all the same. We stood while Stewart explained the prison’s history and working structure and patiently answered a stream of questions.

As he did so the prison carried on all around us, with the sounds of cell doors clanging, keys (and more keys!) and male voices. All of this was permeated by the smells of a closed institution: Sunday (‘school’) dinner, laundry, stale air, but (surprisingly given all the media coverage of prisons) not a trace of drugs. This was a calm space as far I could see. Outside in the exercise yard men were chatting in the sunshine, no one paid this small group of visitors any attention, they just seemed to be getting on with life.

As we wandered through Stewart took us to the staff room in one wing. Quite an ordinary space with kettle, cups and tupperware lunch boxes. Well ‘ordinary’ except that this was one one of two condemned cells in Wandsworth and so suddenly we were left to imagine how some people may have struggled to relax while they waited to see if an appeal was successful or the executioner would lead them off to the gallows.

Outside, as we stared up at the razor wire that is intended to prevent modern prisoners emulating the Great Train robber Ronnie Biggs and scaling the high walls, our attention was brought to the concrete paths that cover the ground between the walls and the prison itself. Under here, we were told, lie the remains of those who were executed within the confines of the gaol. Since the abolition of hanging families have been able to exhume their loved ones and rebury them, but many don’t. As our guide pointed out most murderers kill people close to them and so the hanged are often the second deaths in a tragic set of events. Let sleeping dogs lie is often the most obvious reaction.

One young man whose remains were taken away to be cremated outside was John Amery, the son of Leo Amery the Conservative politician and (like Churchill) a noted opponent of appeasement. Unlike his father John Amery was attracted to the Nazi cause and became a fascist and follower of Hitler. He was hanged at Wandsworth in December 1945 for his treasonable activities during the war.

The final place we visited was the set of smaller wings that used to make up the women’s prison until the late 1800s. During the First World War this was utilised by the military as a detainment camp. Here the prison held squaddies that broke the rules or absconded as well as conscientious objectors and (following the Easter Rising in 1916) upwards of 200  Irish Republicans accused of ‘betraying’ their king and country.

And then – and I have to admit this was quite a relief – we were back to the reception house and, once we’d handed over our passes, the doors were opened and we exited into the afternoon sun. The walk across Wandsworth Common took me past couples of all ages, children playing, dogs running free, ice cream vendors and people sitting outside the nearby pub enjoying a pint with their friends. It was a sobering reminder of what everyone in that prison had given up – albeit not all voluntarily.

Wandsworth Prison museum is not open to the public but is open for academic visitors, researchers and local history groups. All you have to do is make an appointment and be curious (and brave) enough to cross the threshold.